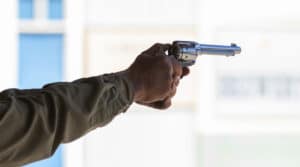 Unfortunately, due to the demand of current members and the disruption of Covid-19 regulations, we’re unable to take any new members until 2021. Please check back in the new year.

The targets are placed on steel stands in banks of five and set at a variety of known distances, with the competitors having a certain amount of time to knock as many down as they can. The firearms used must fall into one of four categories: Production, Revolver, Standing and Unlimited, and there are three official matches: Big Bore, Smallbore and Field Pistol, with each match having its own categories.

In Handgun Metallic Silhouette, competitors shoot a handgun to knock over metal targets shaped like chickens, pigs, turkeys and rams. They are of varying thicknesses and are placed at ranges between 10 and 200m, depending on the calibre of the handgun being used. A steel stand is set into the ground and the targets are placed on it in groups of five, with each five-target group called a ‘bank’.

Targets are fired upon in timed two-minute stages, firing at five targets per stage, in order, from left to right. The target must be knocked over to score. Any hit that doesn’t topple the target is scored as a miss, no matter how good the shot was.

The handguns used in the Big Bore and Smallbore matches fall into four categories.

Production category handguns are the mainstay of Handgun Metallic Silhouette. This category was introduced to allow shooters to compete on an even footing as far as equipment was concerned. The handgun must be used complete in form, finish and mechanical function as manufactured, with few modifications allowed. Aftermarket sights and grips may be fitted, provided they are catalogue items and can be fitted without modification to the handgun or the part.

Barrel length must not exceed 10.75″ (273mm) and the weight of the handgun with all accessories must not exceed 4lb (1.8kg) unloaded. A trigger job may be performed by polishing the sear engagement surfaces of the trigger and hammer. The factory springs may be modified, but no aftermarket parts may be used. Muzzle brakes or ported barrels are not allowed in this category. Bolt-action handguns are not allowed in the Production category, but all other types of action are acceptable.

The Revolver category is self-explanatory, but the revolver must also meet the Production category rules, in that it must be a Production revolver. The handgun must be loaded with five rounds and fired as a revolver, although the same handgun may be loaded singly if later used in the Unlimited category.

The Standing category is also largely self-explanatory; the handgun must be fired from a standing position. The firearm used for this category must be a Production-class handgun and may be a single-shot, revolver or self-loader. The handgun may be held with one or both hands, with no support to the shooting arm between the wrist and shoulder.

In the Unlimited categories, the shooter’s imagination can practically run wild as far as handgun selection is concerned. The only restrictions affecting an Unlimited handgun are a barrel length and sight radius limit of 15″ (381mm) and a maximum weight limit of 6lb (2.7kg). There is no restriction on calibre or action type, and many of the centrefire bolt-action handguns are chambered in rifle calibres.

Smallbore matches require the use of rimfire handguns to knock down chickens at 25m, pigs at 50m, turkeys at 75m and rams at 100m. You might expect that because the range distances are halved that the targets would also be half-sized – not so. The targets are scaled down to three-eighths of full size, which makes this match more difficult to shoot compared to the full-sized Big Bore match. There is also a 50m Rimfire match, using one-fifth-scale targets, which is popular with clubs having restricted ranges.